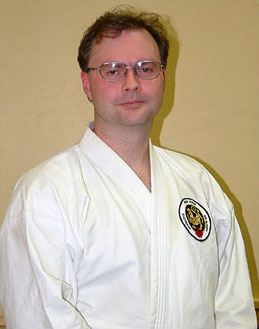 Jon started karate training in 1972.  At that time, Umberto Marasco, a student of the Father of Canadian Karate Masami Tsuruoka, ran the Newmarket Karate Club.  Other members of the dojo included Jim Jennings and Brad Jones.  By 1976 Umberto passed the dojo operations on to Brad Jones who had earned his Shodan (first degree black belt) with Masami Tsuruoka earlier that year.

After 10-years of diligent training, and while studying post-secondary Architectural Technology and Building Science, Jon achieved Shodan in 1983.  During much of that time Jon earned his Karate lessons and membership by performing administrative tasks and odd jobs at the dojo.  Nidan and Sandan ranks were achieved with Tsuruoka Sensei under the guidance and training discipline of Sensei Jones in 1987 and 1992 respectively.  In 2000, Sensei Yamaguchi recognized Jon's skill level by grading him to Shodan in the JKS system.  In 2001, Sensei Juffs successfully graded to Yondan as part of the first group of students graded by Sensei Jones after he earned recognition from the National Karate Association of Canada.  In 2010, Jon achieved the rank of Godan.

Recertification of both Shodan, Nidan and Sandan have been made with the JKA under the guidance of Saeki Sensei and Tanaka Sensei.

Since 1985, Jon has had a keen interest in the development of junior karate athletes.  The Karate Ontario Junior Development Program commenced in 1986 with Jon Juffs, Timothy Suzuki, and Karen Tazar (nee Steward) founding the first committee.  In 1987, Jon attended the Canadian National Black Belts Championships as coach of the first-ever junior competitors, including Shauna Sedgewick, Cosimo Ribezzo, and Deborah Lucchetta.

Throughout the late 1980s and until the mid 1990s Jon and his wife Monica McLean, also a Shodan, served on the Board of Directors of Karate Ontario.  Among their many contributions were officiating, tournament direction, and constitution development.  In addition to, Jon was certified in 1996 as a National Kumite Judge after many consecutive years as a certified Provincial Kata and Kumite judge and referee.

With Sensei Jones encouragement, Jon supplements his local training by participating in various camps and seminars with guest instructors.  Included among them are many notable Shotokan karate instructors like:  Asai, Imura, Kanazawa, Kato, Katsumata, Koike, Nishiyama, Saeki, Sugimura, Tanaka, and Yamaguchi.  In 1999, together with Sensei Jones and Sempai Gossen, Sensei Juffs joined a group of Canadian karate practitioners for 10-days training in Gotemba, Japan at the personal instruction of Yamaguchi Sensei.

Jon and Monica are actively involved planning and running dojo events.  Weekend junior classes are regularly taught by Sensei Juffs as well as many weeknight beginner and advanced classes of all ages each month.  He is a proud multiple recipient of the Tsuruoka Cup, a dojo award presented annually to a black belt who most exemplifies the dojo kun by virtue of good character, ongoing sincerity, constant effort, exemplary respect, and genuine peace.