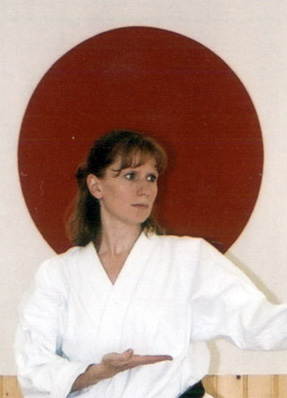 Sempai Deanne Grove began her martial arts training in 1993. Over the years she has participated in training camps in Montreal, Toronto, Newmarket, Ottawa and Tokyo Japan.   These camps were conducted by senior instructors from the JKA, JKS, and Kysho-Jitsu organizations that included, but were not limited to; Tsuroka Sensei, Yamaguchi Sensei, Katsumata Sensei, Saeki Sensei, Nemoto Sensei ,  Asai Sensei and Sensei George Dillman.

In 1999, Deanne successfully passed the Shodan examination, as conducted by Yamaguchi Sensei, with the Technical Director Asai Sensei .  In 2002 Deanne, Sensei Brad Jones and Sempai Tibor Nemecz, attended the annual black belt instructor’s training program, at the Japanese Karate Associations home dojo in Tokyo Japan.  It was an adventure of a lifetime, one that was only made possible through years of commitment to the study of Shotokan karate, under the direct guidance of Sensei Brad Jones.

In 2002, encouraged by the training she received in Tokyo, and through the endless support of her Sensei’s and Sempai’s, she successfully passed the Nidan examination. In 2007, Deanne received her Shodan in Kysho-Jitsu through Dillman Karate International.  After more than 15 years of consistent training, and more than 10 years of assisting and instructing, Deanne successfully attained Sandan under the grading board of Sensei Brad Jones, Sensei George Taylor, Sensei Leo Cossetto, Sempai Jon Juffs and Sempai Wallace Gossen.

Deanne is a Senior Human Resources professional and holds the CHRP designation (Certified Human Resources Professional). She has received high honours in the field of Adult Education having successfully completed programs at both college and university levels. Her passion is to work with people to ensure they have the knowledge, skills and attitudes they require to achieve their goals and reach heights they may never even dreamt possible.

Sempai Grove also enjoys participating in community efforts and has formed “The Budo Bikers” a team of karate-ka riding their bikes to conquer cancer. In 2009 Deanne and a fellow instructor, Nidan Nora Thomson raised $6825.00 for cancer research, on the 200+ KM ride from Toronto to Niagara Falls.