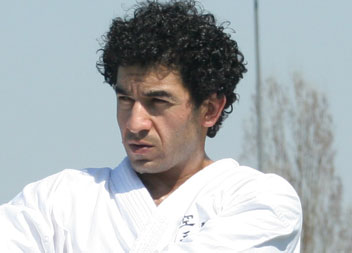 In the mid 1980’s for the first time I was introduced to karate in my hometown Sirwan, Halabja, Sulaymanya in northern Iraq

My uncle visited us and I remember it was summer time. After we had dinner we went to the yard and my uncle started to demonstrate karate kicks and punches. To me it was most inspiring event I have seen. Since that moment it became my dream to learn and to train and to become a karate student. Then every summer break I would go and stay at my grandfather’s house just to have chance to practice with my uncle while he was practicing, sometimes at home, or I would go with him to his Dojo, and watch while he gave classes to his students: all adults.

Sometime in early 1992 I joined a kung fu club. I practiced several different kung fu styles: shoaling, and Kung fu To A for about 6-7 years until I moved to Europe.

In Europe I was introduced to kickboxing and I joined a kickboxing club for about 3 years till I moved to Canada. (All these years practicing Kung fu and kickboxing my goal was to find a Shotokan karate dojo that would be convenient to me. But it never happened).

After I came to Canada in 1998 I started seeing many karate dojos! It was like a dream come true.

I had the privilege and honor to train and to meet many great senseis and incredible Karate ka’s.

Since then I started to attend the camp every year as much as I could - I would enjoy the training and the instruction that was given.

Then in late 2010 I was very glad for being able to join Sensei Brad Jones Dojo!

I became one of his Dojo members and became a JKA member!

I have attended tournaments as a competitor and as a coach since 2002 till date in provincial and Nationals.

I have achieved good and bitter results which I am very thankful for.

To me Karate is not about Ranking or winning medals or trophies.

I live in karate or I would say karate lives in me!